Native American Storyteller Tim Tingle of Texas and cartoonist Pat Lewis of Pittsburgh, Pa., have teamed on "Rabbit's Choctaw Tail Tale," which blends humor and respect to the origins of the story.

Tim is a multi-talented individual, known nationally for his storytelling, during which he often sings and plays the flute to maximize the experience. One of his latest projects, the children's book When Turtle Grew Feathers, which is based on the traditional Choctaw folktale of Rabbit racing Turtle, has received enthusiastic reviews and great responses from reading audiences.

Pat is an artist who is gaining much attention in the comics world. His wonderfully fun monsters graphic novel called "The Claws Came Out" was just released by IDW Publishing. For Tim's story, Pat is using an old-school animation style that's reminiscent to the great Tex Avery and his contemporaries. (I'm a big fan of those cartoons so this story will be an extra treat for me!) 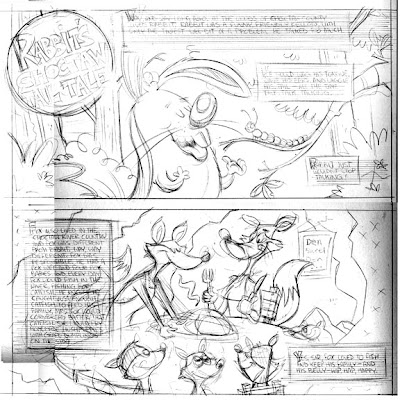