I have an affinity for ravens so I was really excited to read Alaskan storyteller John Active's tale for the book. Sometimes stories are predictable because you've heard them many times or stories similar to them. Not this one. "Raven the Trickster" has plenty of turns that will keep you gluded to the page. For this story, I called on my Canadian colleague Jason Copland. I've followed Jason's work for a few years now and finally had the pleasure of working with him on a story for the Postcards anthology. He's such a dedicated and wonderful artist that I had to try to bring him into the project and this seemed like a good fit. And I lucked out: He was interested and had some time!

Below is what's called a "rough" page drawn by Jason for John's story. (It's like a storyboard for movies where you get the general things down to make sure they work before you render the final product.) 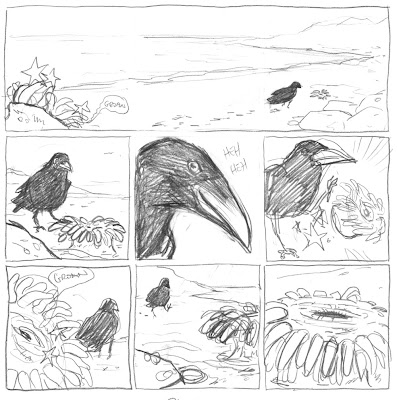 I love anything with ravens! I put lots of them in my Illustration Friday posts.
Steve (Go Flying Turtle) said you'd probably like to see my post for blanket and put it here. Let me know...you're welcome to do it!